...J. Fred Weston Distinguished Professor of Finance and Economics
at the Anderson Graduate School of Management at UCLA.

I have just read Mr. Klein's latest post. I was not an active party to any events a year ago, I am not now, and I do not speak for UCLA. I can only give my own opinion on the matter.

The UCLA Anderson Dean (and my friend), Professor Antonio Bernardo, is not allowed to comment on personnel-related matters and on pending litigation. UCLA legal rules prohibit this. It does not give outsiders the appropriate perspective when only Mr. Klein goes on the attack on national Fox News and beyond. I also resent that Professor Bernardo has no choice but to be his Piñata.

As to Mr. Klein's general views voiced on academic freedom and tolerance (which he now more appropriately discusses outside an accounting course), I not only respect them, I also share many if not most of them. Universities should encourage the voicing of more unpopular and uncomfortable opinions. Some universities and departments seem more like 1984 than Voltaire. The Heterodox Academy advocates for the ability to voice offensive views — nobody else needs to agree. Provocative, controversial, and offensive views are often good. The silent majority of intellectuals probably supports free speech, too.

However, my problem here is not academic freedom but academic context. Mr. Klein is a lecturer hired and paid to teach our students the specific subject of accounting as good as he can --- just as it is my job to research and teach finance as good as I can. I wish Mr. Klein would have focused on his job. A simple "no" to a student inquiry would have been quite sufficient. I also wish the students had never publicly posted Mr. Gordon's response. In my mind, both Mr. Klein and the students' actions were gratuitous, but neither were serious offenses. I do resent that both have caused unnecessary distractions from Anderson's educational mission and that these distractions are now extending even further.

It seems that Mr. Klein has been enjoying the publicity that his victimhood, case, and public appearances have bestowed on him. We can only hope that his new-found national publicity will not further harm his consulting practice. 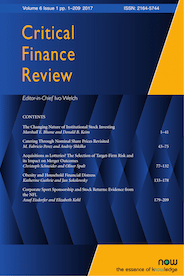 A Literature Survey...and then some.

What can predict the market?

A book on climate change

Is there any crowd wisdom?

What is the best (and easy) estimator of market-beta?

Did stocks outperform bonds because they were riskier or longer-term?

Could you predict stock returns with dividend-yields (etc)?

Can you measure disaster risk in-time? Can it explain the equity premium?

Has in/ex-clusion from the S&P500 changed over the decades?

Does your paper or the draw of the referee matter more?

I do blog occasionally—sometimes, for therapy, sometimes for insight.

This website is available not only in http: (unencrypted) but also in https (encrypted) form for the paranoid.